Whether it’s for cooling in summer or heating in winter, Australians would be lost without air conditioning. But with so many options to choose from, how do you know which brand is best for your home comfort?

To answer that question, Canstar Blue annually surveys hundreds of households who have recently purchased and installed a new air conditioning unit, asking them to rate their brand on a number of important variables, including ease of use, reliability, quietness and value for money.

Seven big name brands featured in the final results, but only Panasonic scored five stars for overall customer satisfaction, in addition to every other category. 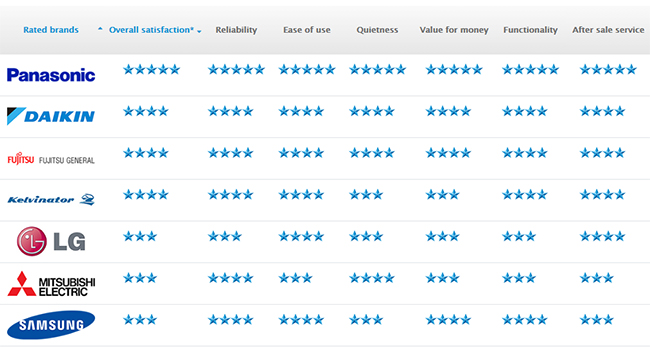 It means Panasonic joins Daikin and Fujitsu General in claiming the award for air conditioners twice in the six years of these ratings. Panasonic last topped the ratings table in 2014.

“Panasonic is a pioneer of air conditioning innovation, with its broad range of products coming equipped with a number of highly impressive features,” said Head of Canstar Blue, Megan Doyle. “No doubt these features are impressing consumers, but Panasonic is also still delivering on the basics – namely that its air conditioners are easy to use and reliable, while also representing good value for money.

“This year’s result means Panasonic has joined an elite group of brands which have achieved our award for air conditioners twice since the category was launched in 2011. These ratings should give consumers who buy a Panasonic air conditioner confidence that they are getting a quality product.”

Joe De Bella, Product Marketing Manager, Air Conditioning, Panasonic, said: “Panasonic Australia is delighted that its air conditioners have received a five star rating across the board from Australian consumers. Canstar Blue is a gold standard in customer satisfaction ratings in Australia, and this award is a great recognition of consumer confidence in our brand.

“Panasonic prides itself on the products that it launches in all categories, and air conditioning is no exception. Our air conditioning products are put through a stringent array of tests for comfort and durability before being released into the market.

“This, along with a host of features which give great benefits to the consumer, and our dedicated after sales service, have contributed to winning this award in such an emphatic way.”

The Canstar Blue survey, of 635 Australian households who have purchased a new air conditioner in the last three years, found an average spend of $1,900. It also revealed a strong focus on energy efficiency, with 44% of respondents declaring it their number one purchase decision factor, compared with 42% who were driven by price. In addition, eight out of ten households (82%) who were replacing an old system said their new one is more energy efficient.

However, it seems that not everyone is getting the best possible results from their air conditioners, with many households failing to clean their units, which could result in increased power consumption. Four out of ten (41%) survey respondents admitted they have never cleaned the internal filter of their air conditioner, while 37% have never cleaned in or around the external unit.

Canstar Blue commissioned Colmar Brunton to survey 3,000 Australian consumers. The customer ratings for air conditioners are based on the responses of 635 adults who have purchased a new system in the last three years.

Canstar Blue was launched in July of 2010 by CANSTAR – Australia and New Zealand’s premier researcher of retail finance information for more than 350 institutions across the finance sector. Canstar Blue measures and tracks Australian and New Zealand consumer satisfaction across over 100 different categories to help consumers make the best purchasing decisions for their needs.

What are the Canstar Blue ratings?

Canstar Blue researches, compares and rates products and services according to customer satisfaction across categories including banking, telecommunications, appliances, electronics, utilities and FMCG. Results are freely available to consumers who are encouraged to use the ratings as a guide to product excellence. The full range of results can be seen on the Canstar Blue website at www.canstarblue.com.au.