Panasonic is proud to introduce the much-anticipated LUMIX GH6 – the latest flagship model in the LUMIX G Series digital mirrorless camera range, pushing the limits of what is possible from a Micro Four Thirds system camera.

Aaron Waters, Product Marketing Manager, Imaging, Panasonic said: “In 2009, Panasonic pioneered the photo/video hybrid category with the first model in the GH Series, the DMC-GH1. Since then, each subsequent model has driven innovation, putting technology and features normally reserved for high end cinema cameras in the hands of aspiring creators worldwide.  Today, it is renowned as a first-choice tool thanks to its performance, mobility and rugged design. Like the legendary GH5, the LUMIX GH6 again breaks boundaries in the category.”

In a Micro Four Thirds category first, the GH6 sports a newly developed 25.2-megapixel Live MOS Sensor. In addition to high resolution imaging and high-speed signal readout, the sensor’s single exposure HDR technology is a significant leap forward in dynamic range performance. The next-generation Venus Engine powers not only advanced image processing and computational photography, it also unlocks a new world of video codec options and framerates to enhance workflow and versatility for professional or aspiring videographers. The GH6 offers V-Log/V-Gamut and provides an amazing 13+ stops of wide dynamic range[i].

Streamlining workflow for creators, the GH6 now includes Apple ProRes 422 HQ, 5.7K 30p internal video recording. This saves time in the editing stage of production by avoiding the time-consuming step of transcoding media from common compressed codecs into ProRes or proxy formats, as is often done by mirrorless hybrid camera users. Today, creators are also demanding high framerate recording options in higher resolutions. The GH6 delivers on this with outstanding C4K 120p in 10-bit 4:2:0, all without a crop or the image quality compromises that are often encountered in the hybrid camera segment. LUMIX users have always enjoyed reliably long recording times, and the GH6 is no exception with unlimited recording assisted by Panasonic’s latest heat management technology, including in intensive recording modes such as C4K 60p 10-bit 4:2:2[ii].

Building on our legacy of incredible stabilisation for hybrid shooters, the GH6 achieves 7.5 stops of powerful image stabilisation in both wide and telephoto focal lengths. Dual I.S.2 gives users the freedom to choose between using tripods, gimbals or totally handheld, all while delivering smooth and professional images. The GH6 has adopted a new super high-precision 5-axis gyro sensor with a new algorithm to achieve 7.5 stops of Body I.S.[iii] and Dual I.S.2[iv].

Panasonic is excited to see the GH6 released to the market and looks forward to the new creative dimension it will offer professionals worldwide.

Aaron Waters added: “In tandem with the GH6 launch, Panasonic Australia is excited to introduce LUMIX Professional Services (LPS). We understand the requirement for high reliability in the challenging shooting situations that professionals often face. LPS is a dedicated support service, designed to provide an even greater level of service and support for professionals who rely on their LUMIX equipment every day. This program provides peace of mind so creators can spend more time focusing on their creative projects. The LPS program delivers a range of benefits including fast turnaround for repairs, complimentary access to loan equipment and dedicated support services. Members get exclusive access to extra perks such as free sensor cleans and the ability to trial some of the latest product releases.”

Utilising the powerful image stabilisation system, 100-megapixel high resolution images can be captured in camera using the High Resolution mode both with a tripod or handheld. Eight consecutive images are automatically shot while shifting the sensor using the Body I.S. The result is a 100-megapixel (11552 x 8672-pixel) stunning image that faithfully reproduces precise details and can be saved in both RAW and JPEG. To provide users with the greatest shooting flexibility, multiple modes are available to shoot a variety of scenes, including those with motion.

In response to requests from professional users, Panasonic has included video assist functions such as Waveform Monitor, Zebra Pattern, Luminance Spot Meter, Frame Marker, Anamorphic Desqueeze Display, Red REC Frame Indicator and Tally lamps. Some of the new enhanced features include Safety Zone Marker, which shows a guide of 95%, 90% or 80% recording area; while Centre Marker now allows you to choose the type of marker. In Colour Temperature Setting, the kelvin values can now be displayed on the user interface while recording.

High resolution audio recording is now possible supporting up to 24-bit 96kHz[vii]. By using the optional XLR Microphone Adaptor DMW-XLR1 and the 3.5mm input jack/built-in microphone, users can capture four channels of audio, reducing the need for external audio recording devices. Combinations of external microphones can be used to best fit the recording situation – such as outdoor interviews where voices and ambient sound both need to be captured. The headphone channel can be switched during video recording and audio menus can be directly accessed with the Fn1 button on top of the camera for easy sound level checks during 4-channel audio recording.

4K 60p Time Lapse video can also be produced inside the camera. With the Exposure Levelling function, the exposure is automatically adjusted to prevent large changes in brightness between adjacent frames, allowing daytime to nighttime ‘holy grail’ time lapses to be created in camera. The internal time lapse calculator allows users to understand the required settings without the use of external apps/intervalometers.

Agile and smart operation for professional use

Taking advantage of the new sensor and image processing engine, the auto focus performance of the LUMIX GH6 has been improved. With higher speed signal processing by the new image processor and an improved AF algorithm, subject detection performance has been dramatically enhanced to achieve higher precision AF.

To support high precision focusing, the LUMIX GH6 provides practical options for manual focusing such as MF Assist, which enables the focus point to be enlarged while video recording. The linear focus control enables repeatable focus pulls to be achieved by adjusting the degrees required for the lens to move through the focus range from close to infinity focus.

Reliable quality and performance for professional use and connectivity

The GH6 boasts a rugged field-ready design. As well as having a magnesium alloy full diecast front/rear frame, it is splash[viii] and dust-resistant and also freeze-resistant down to -10 degrees Celsius. Recording buttons are located on both the top and front of the camera, which makes it easy to start and stop recording even when shooting at a low angle or with a shoulder rig.

The camera has a full-size HDMI Type A terminal. Plus, a cable lock holder for the HDMI/USB cable is bundled to prevent issues such as accidentally unplugging on location. The GH6 supports USB 3.2 Gen 2 for high-speed transfer.  The 2200mAh (DMW-BLK22E) high-capacity battery can be conveniently recharged either via AC or USB PD. The GH6 is also compatible with Time Code IN/OUT synchronisation through the flash synchro terminal and bundled BNC converter cable. This streamlines non-linear editing of footage shot with multiple cameras.

The GH6 supports Bluetooth 5.0 and Wi-Fi 5GHz[ix] (IEEE802.11ac)/ 2.4GHz (IEEE802.11b/g/n), for easy content sharing with smartphones. With an always-on Bluetooth connection, a smartphone can act as the camera’s remote control via the LUMIX Sync mobile app. The settings of a GH6 camera can also be copied and transmitted to other GH6 cameras when shooting using multiple cameras (either via LUMIX Sync or SD Card). Hassle free firmware updates are also available via LUMIX Sync. 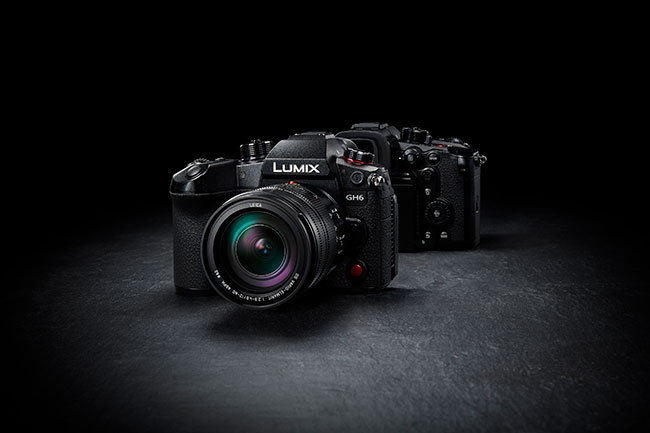 The GH6 will be available in April 2022 from leading photographic specialists.

For further information, please visit www.panasonic.com.au
LPS can be found at https://lumixpro.com.au